Today I’ve done something I’ve not done before as Group Scout Leader. I represented the Group at a book launch (not that I’ve ever attended a book launch in a non Scouting role either!)  at the Staffordshire Regiment Museum in Lichfield.

Not the usual book to be associated with Scouting, but this one, launched on eve of the 100th anniversary of Britain’s entry into the First World War, lists the names and details of men who served in that Battalion and were killed in action. It also lists those men who were awarded medals for their bravery.

Amongst the men of the Battalion killed and awarded medals was Rev. Frederick Walter Cleveland. Frederick Cleveland was our Scout Troop’s Chaplin while he was curate at St. Andrew’s from 1913 to 1915.

He was a Chaplin with the Battalion and was awarded the Military Cross for helping the wounded during the taking of the St. Quentin Canal on 29th September 1918. Sadly he was killed in action a couple of weeks later on 11th October 1918. You can read all about him here on his remembrance page.

Although his story is a very small part of the book, I was pleased to let the author have Fr. Cleveland’s information for its inclusion.

As a Group, we are proud to remember the 18 men from the Troop (that we know of) killed in the Great War (not forgetting those killed in WW2). 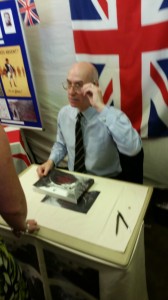 I am proud to have represented the Group so that these men may be remembered in as many ways as possible.